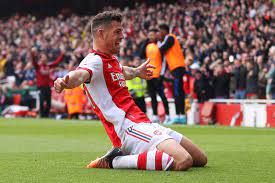 Paul scholes says that Arteta’s conduct on the sidelines while the footage was being reviewed  was annoying, as he said on Premier League Productions: “I didn’t really think of the foul, to be honest.

“That brings into question whether it’s a clear and obvious error, which is the only reason it should go to the VAR.

“It’s a coming together, of course it is. I think Arteta is a disgrace there. He should not be allowed to do that. If you see it again, he actually goes to the crowd to try and influence the referee a little. All the players around them as well. That shouldn’t be allowed but it’s a little bit clumsy from Telles.”

Manchester United won the first leg when the two teams met in 2021 in a controversial 3-2 score line where Manchester United were awarded two penalties both succesfully converted by Christiano Ronaldo. On Saturday afternoon the two mets met yet again in a match largely dominated by Arsenal finding a goal in the second minute, both sides were also awarded a penalty though United’s Bruno Fernandes squandered the chance to draw 2-2 hitting the post before the ball went outside for Goal Kick.

The Win kept arsenal chances of securing a top four finish alive with five games left to play. They currently seat 2 points ahead of Tottenham having played the same number of games and the latter yet to face Liverpool and Arsenal in the remaining fixtures.

Arsenal currently remain favorites to secure a Champions league position, even as the play West Ham on Sunday, they will then face Leeds, before a derby fixture against Tottenham.

Paul Scholes also lamented United loosing a match that would have kept their Champions League hopes alive, United are currently six points behind Arsenal having played a match more. With the remaining fixtures, their hopes of a top four finish have diminished.