Caleb Kositany accused of wrecking UDA boat from within 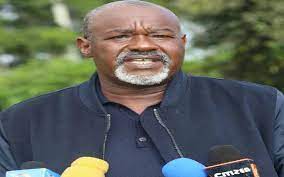 In an old clip circulated online after Alfred Keter’s UDA certificate was withdrawn and awarded to his competitor Kitur, Caleb Kositany is heard accusing Alfred Keter of being a Kipsigis and that the Kipsigis elders should come from him.

Alfred Keter, A Nandi from Nandi Hills has often been accused of being a Kipsigis for political mileage, the legislator who is perceived as a Rebel in the Rift and a sharp critic of presidential candidate William Ruto, had narrowly won the UDA seat in the just concluded nominations.

His win was annulled in what the election board termed as elections marred with malpractices, However, Keter has accused Kapseret MP Oscar Sudi and Soy’s Caleb Kositany of wanting him out of parliament based on his previous stand on regional politics.

The video has elicited mixed reactions with most Kalenjins wanting him to ask for forgiveness immediately, apart from being perceived to create sub tribal divisions; Caleb is being accused of meddling in the will of the people. The Kipsigis are also the largest Sub Tribe within the Kalenjin community where Deputy President William Ruto draws a huge following.