Rep. Maxine urges protesters to get more confrontational if George Floyd Killer Chauvin is not convicted. 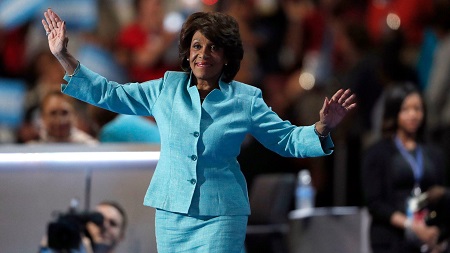 California’s Representative Maxine Moore Waters has urged protesters to get more confrontational and remain on the street if Derek Chauvin is not found guilty of killing innocent black man George Floyd.

Water’s comments which come from a high-ranking member of society and a democrat were exploited by Republicans who have always been accused of promoting racism and twisted to paint her as actions as amounting to inciting violence. At a time when there is rising national tension as a result of racist actions perpetrated by the police and whites with over five high profile cases of Black Americans being killed by police over the past month alone.

In one of the cases, a white policewoman shot a Black Teenager Daunte Wright on close range for a traffic offense, a case that her defense now claims she pulled her gun instead of a taser gun which she really meant to. Over the weekend another black man was shot and killed by the police on accusations of holding a gun when some video evidence reveals he was not holding a gun at the point.

As Derek Chauvin’s trial nears trial, his defense has so far mounted a weaker defense always taking the opportunity to convince the Jury to ignore the 9 minutes 29 seconds video showing Chauvin kneeling on Floyd’s neck. The prosecution however, backed by several witnesses have debunked every argument brought by the defense in a case where many expect nothing but a guilty verdict.

Waters on an interview said she was in Brooklyn to show support to the protesters who are drawn from all races over the fatal shooting of Daunte Wright as well as support his family.

“We’re looking for a guilty verdict and we’re looking to see if all of the talk that took place and has been taking place after they saw what happened to George Floyd. If nothing does not happen, then we know that we got to not only stay in the street, but we have got to fight for justice,” she added.

Waters comments come at a time when many believe its time to stand by history and advocate against the inhuman treatment that Blacks have had to go through in America with support from the political system and the justice system.

Early on Monday the lead Judge Peter Cahill was perceived to have shown bias when he advised the defense, drawing reference to Waters comments, he told the defense that she “Waters”, “may have given you something on appeal that may result in this whole trial being overturned.”

A few Republican representatives seized the opportunity to criticize her who include Rep. Marjorie Taylor Greene, Mitch McConnell, Kevin McCarthy, and Ted Cruz. This is a clear indication that the matter may take a political angle even after the courts have pronounced their judgement, in essence, Racism must be fought on all fronts, Former US President Donald Trump a Republican was once quoted saying “When looting starts, shooting starts” remarks that were made when some demonstrators destroyed property just after the murder of George Floyd, remarks that were considered by many as openly racists.