Arsenals Pepe confirms he is better than United’s Anthony Martial. 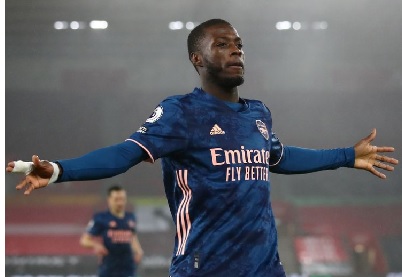 Arsenal have definitely had their fair share of bad performances this season. However, based on their recent form, they are now the second most in-form Premier League team after Manchester City, picking 16 points out of a possible 18 in their recent matches.

Ahead of their clash with Manchester United at the Emirates on Saturday, Arteta remains unbeaten by Ole Gunnar solskjærwith their most recent meeting having ended 1 nil in favor of Arteta’s team at Old Trafford.

Machester United are also in the best form this season and currently seat on second position behind Manchester City after 19 games each. Nevertheless, the gunners seem to have won all the bragging rights first on who is better between Mason Greenwood and Bukayo Saka with the later having scored 5 goals and created more goals than any other youngster in the league.

Nicholas Pepe has also been largely compared to United’s Anthony Martial with most Manchester United fans terming Pepe as a flop. However. you can’t argue with statistics, Nicholas Pepe has currently played a total of 568 minutes in the Premier League this season, while Martial has played 1065 minutes for Ole Gunnar Solskjaer’s side.

His tally in the league this season now stands at three goals and it’s been pointed out that this is one more than United’s Anthony Martial, despite playing significantly less than the Frenchman.

We remain hopeful on whether or not Pepe and Martial will go head to head against each other in the Premier League this weekend, where both sides are eyeing three points for different reasons.