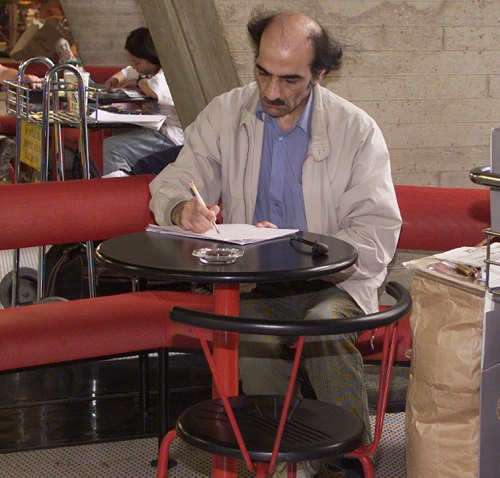 How often do you hear of persons residing in public places for years? Would you believe that someone lived in an Airport Terminal for almost 2 decades? The Story of Mehran Karimi Nasseri otherwise known as Sir Alfred is almost unbelievable but factual. Regular travelers via the Charles de Gaulle International Airport would pass by a common face in the name of Iranian Born Mehran Karimi.

It is unclear how Mehran Karimi exactly ended up in such a situation with claims that he was also a pathological liar. He also later reinvented himself as Sir Alfred denouncing his Birthplace of Iran and claiming to be a British citizen born in Sweden. However, various investigations agree that he attempted to travel to Europe in search of his Scottish Birth mother as well as seek Political asylum after being banished from Iran.

Mehran Karimi studied at the University of Bradford in England in the early 1970s, while a university student, Mehran Nasseri took part in student demonstrations against the last Shah of Iran. Officials from the Iranian government weren’t particularly pleased when they found out about this.  When Nasseri traveled back to Iran in 1977, he was immediately arrested and jailed and consequently exiled for charges of conspiring against the government.

Mehran Karimi spent several years searching for a nation in Europe that would grant him asylum until the United Nations came to his rescue. The High commission for refugees in 1981 gave him a refugee status. With such a status, he was then able to apply for citizenship within Europe as he set his eyes on the United Kingdom where his mother allegedly also came from.

Things turned out bad for Mehran when while on transit to Europe through France, he lost his briefcase containing his refugee papers. There is also an allegation that Nasseri mailed his refugee papers to Belgium for unknown reasons. Without identification papers, the United Kingdom immigration officers could not allow him into the UK and were forced to deport him back to France where he took his last flight from, since there was no traceable country of citizenship.

In France, he could not also leave the airport which is by law deemed an international area as he did not have any identification papers, he could also not fly to any other destination without verification papers, even his Birth nation of Iran. This left Nasseri stranded at Charles de Gaulle International Airport. This marked his first day into an 18-year stay at the airport, where he would usually sleep at an isolated seat, and occasionally freshened up in the airport bathrooms right before the airport began to get busy. He made a number of friends at the airport among them Macdonald’s employees who gave him food. He occasionally received donations from willing travelers and spent most of the time reading newspapers and hanging around the airport.

Nasseri’s situation eventually was brought to the attention of French-based Human rights lawyer Christian Bourguet. He took Nasseri’s case on Pro Bono and sought to assist him out of his misery. Bourguet met the first huddle when Belgium the country where his refugee status papers originated from, could only issue copies of the papers if Nasseri appeared in person. His inability to leave the French airport further complicated his situation. In addition, Belgium also had policies not to allow refugees that had left the country to come back.

After approximately 10 years of following up the case, Bourguet managed to finally convince Belgium to mail replacement refugee papers to Nasseri, after the French government had accepted to grant him citizenship. After what Bourguet and all those who were working on the case thought was a breakthrough, Nasseri created another problem by denouncing the replacement papers. This is after Nasseri had re-invented himself as Sir Alfred. There are also claims that family members from his Iran family including his sister made attempts to see him at the airport and even assist but Nasseri denounced them instead alleging that he was a British Citizen and not Iranian as opposed to Mehran Karimi Nasseri. Nasseri instead opted to remain at the airport.

This triggered suspicions that perhaps he was sick due to his long stay at the airport. In 2006, Nasseri had to be hospitalized as a result of illness, marking his first time in 18 years that he had left the airport from 1988. He was discharged in 2007 to a shelter in Paris France. This is indeed a peculiar story but unfortunately something that happens to probably hundreds of other persons across the world. This perhaps justifies the need for a Global Database of persons for citizen tracking.