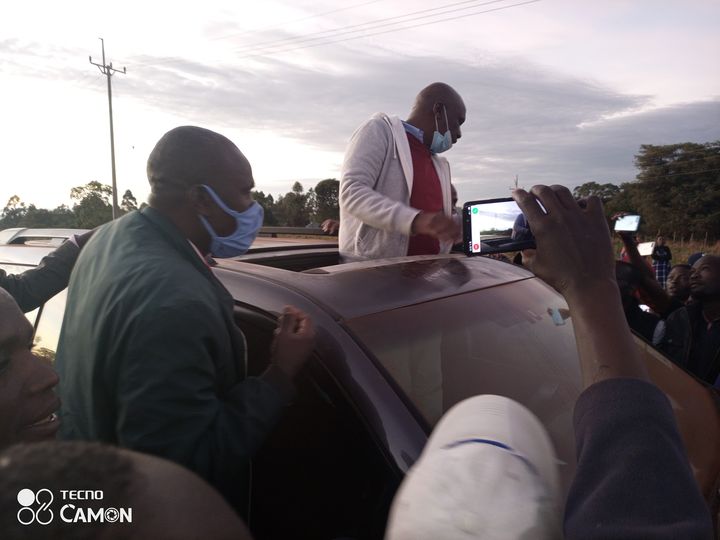 Baringo Senator Gideon Moi was turned away by residents earlier this morning while attempting to seek Blessings from key Talai Clan and area residents. It is believed that the Senator was attempting to be crowned as a Kalenjin Community leader in another show of might with the current already crowned Kingpin William Ruto.

The Kalenjin community have slightly above 12 percent of the national vote and being assured of the regions vote easily propels one to National leadership. However, the community remains majorly guided by the Talai community who have been key in Blessing and crowing former Presidents Jomo Kenyatta, Daniel Moi and even Uhuru Kenyatta.

The Talai clan have also been instrumental in shaping the path of the community with regard to community and National leadership, they have been known to install Kalenjin Community Kingpins as well as bestowing the tools of leadership to whoever they crown the community leader.

The Talai Clan and the Kalenjin community observe strict cultural guidelines in performing their crowing ceremonies which includes the fact that there can never be two crowned community leaders at a time and that any crowning events must be a result of comprehensive consultations within the community.

Gideon Moi is his attempts to seek political mileage visited the Talai Clan in the morning just after the sun had already risen against traditions that any such events must be conducted before dawn. Furthermore, it was perceived as a bid to auction the community to someone who does not have their interests at heart.

The Deputy President William Ruto, currently enjoys 95% support from the region with the senator having greatly benefited from his fathers influence in Baringo to clinch the senatorial seat and he is believed to have zero influence outside Baringo especially after the death of former President Daniel Moi who was also his father.

It is alleged that the KANU chair faced a rough time after confronting locals who barricaded all roads leading to one of the elders, Christopher Koyoki, the former chair of Talai council of elders.

It took the better part of Saturday dawn negotiating with the uncompromising chaotic youths to open the way to the venue where the coronation event was supposed to take place, however, the Senator was forced to yield to the demands of the unwavering youth to turn back and abandon the event.