The Australian City of Brisbane placed under Lockdown to prevent the spread of mutant COVID strain. 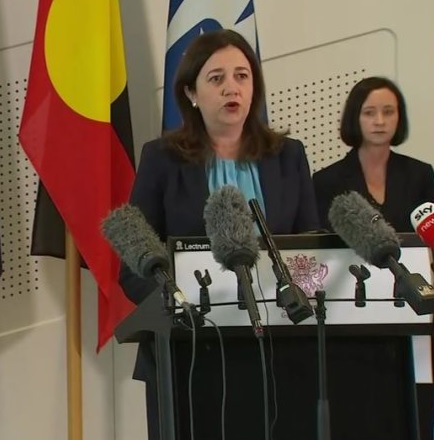 From Thursday 6:00 pm, Residents of Brisbane, Moreton, Ipswich, Logan, and Redlands shall be mandated to remain home until 6:00 pm Monday 11th January in an attempt to control the spread of the highly-infectious COVID strain from the United Kingdom.

This is as a result of a worker at a Brisbane Hotel testing positive on Wednesday to the COVID mutant after being within the community for five days amid fears that she might have infected more persons.

All persons within those communities have been advised to remain home unless it is for essential duties, essential shopping, providing healthcare services, or exercising within the neighborhood.  Mask is also mandatory for those who go out within the mentioned areas with the exception of children under the age of 12.

“This is harsh but necessary action”. Said Anastacia Palaszczuk. She urged residents to think of it as a long weekend and that if this was not done now, it could finally result in a 30-day mandatory lockdown.  The lockdown in Brisbane comes just after some cases of COVID-19 were reported in additional four more sites in Queensland.

Dr. Jeannette Young, the Chief Health Officer said that the viral cases were reported in wastewater treatment plants around Gibson Island at Townsville, a site in Maryborough, and Oulgul at Hervey Bay. It is reported that supermarkets witnessed long queues just an hour after the announcement, prompting another announcement from the Queensland Health office advising residents not to panic buy.

Persons residing within the lockdown areas shall be allowed a maximum of two visitors per day within their homes and have to come for particular reasons. Dr. Young argued that it would be regrettable if she were to stand before the media on Monday to announce that more cases had been reported and that those cases had infected others within the community. She supported the Lockdown measures as a precautionary move to protect the residents of Brisbane.

There were 9 fresh cases in Queensland overnight after 13, 000 tests were performed, all the cases were from Hotel Quarantine. Approximately 450 tests were performed at a clinic on Brisbane south side where the Hotel worker who tested positive lived and is believed to have interacted with other persons.

689 movements of the hotel worker had been traced while she carried herself within the community for five days unknowingly. The contacts were from Algester, Sunnybank Hills, Brisbane’s CBD, and Calamvale.

Brisbane authorities also identified 79 other close contacts of the hotel worker will all those who were symptomatic tested. Their results will be released today. The Quarantine hotel where the hotel worker worked has also been placed under full lockdown.

Dr. Young also urged residents who had been to the Greater Brisbane area from January 2nd to self-isolate for three days. This also applies to those who have already left the lockdown area on holidays of specific duties.

Within the three-day lockdown, restaurants and cafes are to only serve take away food, Gyms, recreational areas, churches, cinemas shall remain closed. Funerals shall be restricted to only 20 people while weddings will have a maximum of 10 persons. All weekend sporting action has also been called off. Those found not wearing masks shall be fined $200 on the spot.