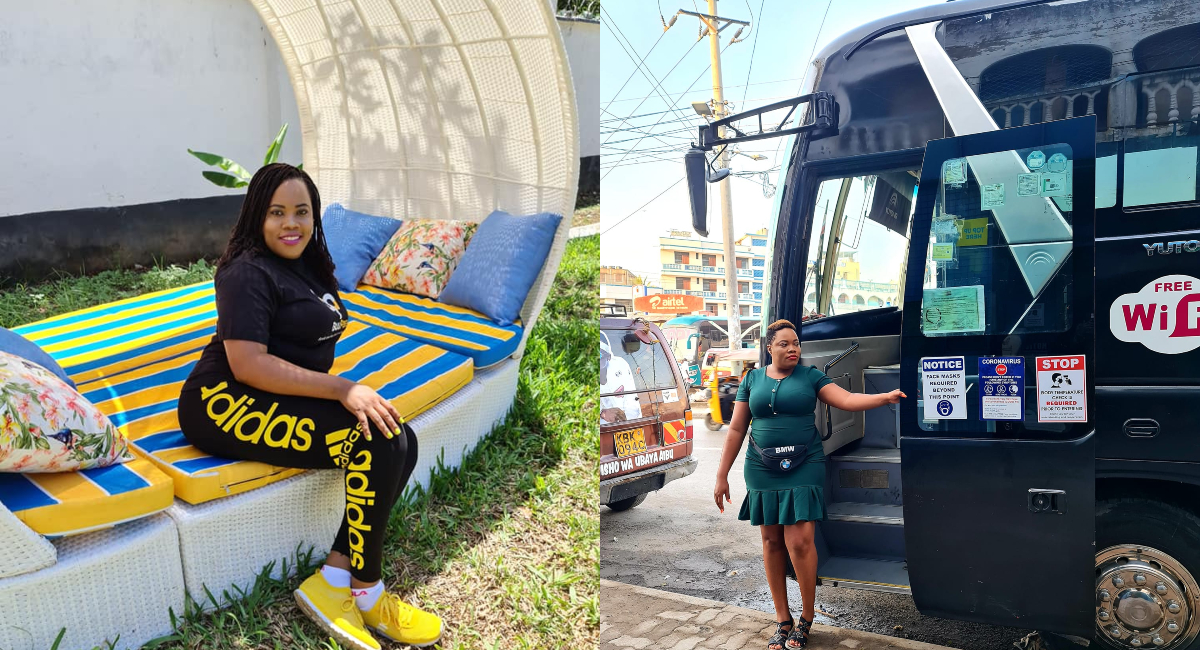 Down in Shivagala village, Ikolomani constituency the home of former Kakamega Senator Boni Khalwale was born a little girl with big dreams of owning a reputable public transport company.

Praxidese Khatembi, a first born daughter in a family of four daughters and one son says, like many other families they struggled to make ends meet.

She said that she lost her mother when she was in form one and also got a baby.

Couple this with other challenges the family faced, she was unable to join college because the fees was not there and there were other four siblings who needed basic education which she had achieved.

â€œAfter some time I moved to Mombasa for greener pastures. I had no level of education to get a good job because all I had was KCSE certificate and so I began washing clothes and utensils at KSh 50 per day for families in between 2006 and 2007 before one family took me in as a stay-in house-help,â€ she said.

Despite lots of needs like supporting her siblings and aunties who were raising her baby, Khatembi was determined to join college and study an aviation-related course.

According to her, being taken in by the family meant more savings because the rent demand was sorted out.

She saved most of her KSh 2,500 per month salary for over a year to get fees to join Mombasa Aviation College where she studied Cabin Crew and a package of Customer Care in 2008.

â€œI graduated with a cabin crew diploma in 2009 November but could not get a job in any of the airlines. Having worked as a house help had made me learn that the job is which is at hand and so I began working as a waitress in tourists hotels in North and South Coast,â€ she explained.

Khatembi had not given up her dream of having matatus or buses and kept praying to get resources to begin her business.

â€œBetween 2012 and 2013 I Saved and bought a second-hand tuk tuk (three-wheeler) at KSh 70k. I repaired it and employed a driver to operate it. At first it was doing well but the driver and others began being stubborn and dishonest. I sensed I would lose the investment and opted to sell the tuk tuk despite with a heavy heart because my dream was dented,â€ she narrated.

She said she kept the dream alive despite the challenges and as she continued doing her work she got lucky and landed an opportunity to move abroad for further training and work.

â€œFollowing the sponsorship to travel to Europe I vowed to do all it took to turn my life around and I would work four to five jobs and clock up to 18 hours a day in summer. I would get about 15 Euros (KSh 1930) per hour and consistently saved as much as I could,â€ Khatembi disclosed.

According to the investor who is currently in Germany, when she accumulated KSh 15 million in savings she travelled to China to make surveys in bus manufacturing companies to have a glimpse of what she would need.

â€œI travelled at least five times to window shop for the best I needed and after settling on what I needed I worked to import my first two buses. I never knew that I would spend much more in terms of clearance, registering for a Sacco and getting passenger service licenses and insurances after purchase of the vehicles,â€ she narrated.

The buses were zero-mileage and she says she had to pay high duty fees to have the buses cleared into Kenya.

â€œI imported a zero mileage buses and paid at least KSh 6.7 million in duty. Comprehensive insurances and getting a Sacco registration cost me over KSh 750,000 and even lost KSh 1 million trying to find the best in terms of insurance coverage,â€ she added.

Her troubles however, did not end there because she realised she did not have booking office and being tough to get one, she had to collaborate with another bus company and use their offices.

The competitor demanded 10% of her profit and the rule was that her bus would be booked last after the others were filled.

â€œI persevered knowing one day I will have my own office and truly I now have offices in Kisumu, Kakamega, Malindi, Nairobi and Mombasa. The company began operating in October 2018,â€ said the investor who is in her early 30s.

She said she was 30 and about to turn 31 when she began the bus transport company and despite challenges youths and women face like lack of enough resources and discouragement from established investors in the sector, giving up was none of her choices.

Asked how the COVID-19 pandemic had affected her fast growing business, Khatembi said business has been slow but has not affected her ambitions to grow Praxigon to a bigger and best service provider in the sector.

â€œI bought 2 buses during the COVID-19 pandemic time. It has not affected me so much. I did not have any credit facilities being serviced so it was manageable. I accepted the situation and I have been paying my workers and supporting them alongside other people I take care for in my charity programmes,â€ she stated.

She advised people who want to venture in business to focus on savings for a start and only take loans when the business is established and stable to avoid being auctioned.

She challenged women to invest in all sectors especially those perceived as male-dominated because they have extra ideas to offer which will make them grow.

â€œMostly when women get money they open salons, beauty parlours which is good but I chose to walk a different path that women and even men fear and I am not regretting. We need to do away with the fear factor in us because it makes us to fail. The beginning of failure begins with fear- I only fear God,â€ Khatembi said boldly.

She observed that many great businesses have collapsed because owners went for loans without establishing the businesses.

â€œSave to begin business rather than take loans so that when the business is not that stable you donâ€™t have to struggle repaying and getting auctioned. Concentrate on the growth, not the profit,â€ she added.

She also pledged to donate sanitary pads to women convicts saying a story of women sharing pads in prison facilities was disheartening.

â€œI have a plan to visit Langâ€™ata womenâ€™s prison. The story of sharing sanitary pads was hurtful. I plan to visit the women and support them, despite being convicts their dignity as women must remain,â€ she said.

Khatembi encouraged women to work hard, saying she was procuring two other buses which she hopes to get a female driver to operate and applauded her staff for being excellent in customer care provision, something she cited as special in her company besides the luxurious modern Praxigon buses.