Florida vote to increase minimum wage to $15 per hour. 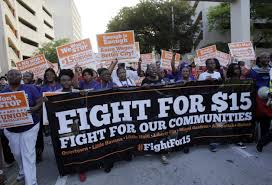 The initiative undertaken together with the country elections, gained the 60% that is required for it to pass. The initiative almost doubles the previous hourly rate of $8.56 and is set to be implemented within a period of 6 years, beginning with $10 in 2021 and a rise of $1 each year for the 5 years that follow.

A number of activists and labor advocates have always called for the increase of minimum wage in order to provide decent living standards to workers across Florida. The group then reached out to partners across the country with the house passing a federal $15 hourly wage in 2019.

As much as this may be joy for workers, it is a threat to businesses operating in Florida. Some businesses may be forced to relocate to other states if the costs of doing business increases and shrinks their profits. Given that some neighboring states are yet to pass such laws; businesses will be forced to shift.

For food joints and restaurants, it is highly likely that these costs will be passed down to consumers, with some customers even forced to change their habits/lifestyles if they can’t afford. For instance, if it becomes expensive to eat out at a restaurant, families will opt to reduce the number of times they eat out to perhaps once or twice a month.

With Florida dependent on tourism and service sector jobs, this might also impact on the local economy with tourists opting for other cheaper destinations.