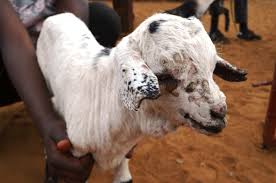 A Baringo family was left in shock after an angry man stormed their home and carted away with rabbits and goats.

Daniel Kemboi 27 stormed the the home of his crush Vivian Jebet and took the livestock in what was later known to be compensation for the money the woman had been sent but failed to use it as agreed.

Kemboi from Koroto in Baringo North claimed that he had sent Vivian KSh 1,500 which she was to use to travel to his place but the latter failed to show up without a reasonable excuse.

The man claimed that he had sent fare to Vivian severally but the woman had repeatedly failed to travel to Kemboi’s home irking him to a point he had to take the law in his hands.

A man from Baringo County has found himself in hot soup after he stormed the home of a woman he has a crush on whom he had been sending fare repeatedly in vain.

TrendinLeo.co.ke understands that Vivian was still staying with her parents in Kipcherere village and the animals confiscated by Kemboi belonged to them.

The decision by Kemboi to snatch the animals from Vivian’s home however, landed him into trouble after the woman’s parents called police officers on him for stealing their livestock.

Kemboi was set to be charged before Kabarnet Law Courts on Monday, November 2, breathed a sigh of relief after Vivian’s family agreed to settle the matter out of court.

Social media sites are frequently awash with Kenyan men stories complaining how they sent bus fare to women to come over to their places, only for the “daughters’ of eve” to switch off their phones, block the men and fail to show up for the dates.

The trend has made men to adapt a habit of telling women to travel with their own fare and will be refunded after they arrive to the men’s homes.