How i was conned by OLX (jiji) trader. 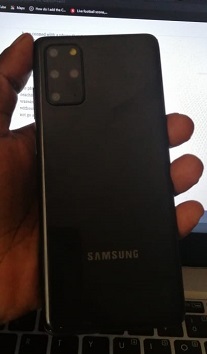 On Wednesday 12th august 2020 morning, in a search of a good phone, i opted for jiji previously olx Kenya as it has worked for me severally in linking up with sellers of various products, little did I know I was in for one f my worst online experiences.

Given that a friend had recommended to me Samsung Galaxy A31, I immediately searched for the item, interested on the price variations as well as features. We have some with 4GM RAM 64 GB ROM and others with 6GB RAM 128 GB ROM.

I found one with a fairly good used Samsung Galaxy A31 from the images posted at a fairly good price. A user by the name Jack Mutuko phone number 0731501617, I reached out to him and he agreed we meet at his shop along Luthuli Avenue within the day.

The user has since removed the advert, and jiji team have also taken action to block him after i reported to them.

At around 1pm I called him and told him to give me directions as I was at the entrance of Electronic house on the junction between Munyu road and Luthuli avenue where he had directed me to find him. He took a while to arrive, so I went to some shop on Electronics house to replace my current phone screen protector, some friendly guy who I also paid via Mpesa withdrawal.

After a few minutes, he came and led me to where his alleged shop was, we chatted a bit and informed him that I was replacing my phone screen glass protector as I had waited for him for a while, to this he told me he does the same job and I should have offered him the job, I casually dismissed him arguing that if he hadn’t kept me waiting I would have paid him for the Job. Just a few meters from the junction, we went to a building with several electronics shops on the second floor, he told me he works for a Mhindi and he did not want the Mhindi to know he was selling phones away from the shop.

He led me to the Balcony, but instead of Samsung Galaxy A31 he sowed me Samsung Galaxy A71 saying that a lady had purchased the A31, He also said that since A71 had better features I would have to increase the price to 18,000, we negotiated to 14, 500 where he said that was his final price take or leave.

He handed the phone to me where I verified everything including the specifications and authentication of the serial numbers. For payment, I told him to give me his Mpesa number or Paybill for me to process payment, he alleged that he did not have an Mpesa line and instead lead me to an Mpesa agent just below the building, a red flag I ignored and proceeded to withdraw the cash.

After withdrawing, it was time to get the receipts and the phone accessories before we could close the business. I also asked him if he knew any dealers for phone housing as I needed a replacement for my other phone, he called a guy to inquire if he had the housing, and responded to me that it was being sold at 1000 shillings to which I replied, let him bring and we see.

He also made a call to some lady to bring down the receipt and phone accessories. He led me to shop corridor downstairs where we waited telling me that the security guy would tell on him to his boss. As we waited, he handed me the phone, which I did not confirm this time but I resembled what I had checked, at this point I saw no need of keeping the money as he had given me the phone and we were together waiting for the deliveries, I handed him the money and we sat on the corridor waiting.

He continued to make calls to an alleged lady to hasten delivery of the accessories, as well as the guy with the other phone housing. We waited for around 5 minutes before he entered another shop requesting for change, which I thought was normal only for the guy to disappear.

After waiting for close to a minute, I called him, he picked my call and asked me the amount I had give me as if he was on an Mpesa shop trying to make a deposit, and told me he was coming with the accessories himself.

That was the last time I saw him, at this point, I checked on the phone I had been given only to realize it was not powering up, I thought perhaps I had been conned with a phone that does not charge, I had a friend with a shop along Tom Mboya where I went to try charge the phone, all this time I tried reaching him for Clarifications, When he picked my call, he said he had given me the wrong phone and that I go to somewhere near Nation Center to collect the genuine phone along with accessories, to which I obliged, I proceeded to Nation center, waited for over 30 minutes without him turning up.

His phone was ringing all through but he never picked, I have tried reaching him for over 12 hrs with calls and text which go unanswered. My warning to the buyer community avoid anyone with an airtel line on jiji or without a Paybill number and a real shop. Or when making a purchase do not go alone or conduct business from the corridors of a house or street.

I personally ignored several red flags and as such i am fully to blame for being conned.

3 thoughts on “How i was conned by OLX (jiji) trader.”