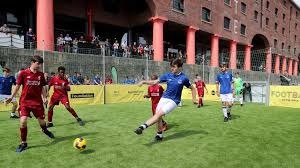 Research indicates that within the civilization process in North America and Europe, modern sporting events were invented as governed activities as opposed to just physical events in the subsequent eras. When sports became fully structured sports officials forbid certain acts of violent play which were common in the eras that preceded it. Cases of bloodshed became minimal and much focus was on individual control to prohibit physical contact and aggressive impulses expression within the spirit of competition.

Tougher penalties such as lifetime bans, penalty tries, red cards and yellow cards should be adopted  against those who engage in violent play, such measures would greatly discourage such acts as players and coaches shall always know what might happen if they engage in violent play. Sports governing agencies should also try to hire several match officials each with a specific function and area of coverage so that the responsibility of spotting such acts will not be left to only the referee and the linesmen.

Also Read...  Consequences of a Roque Media: A Retrospect of Kenya's 2022 General Elections.

Play-participating in an activity for leisure, as a career or for enjoyment