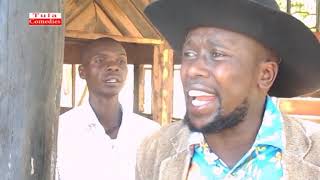 Tula Chemoget also going by the Name DJ Kaptula is a popular event Mcee, one that is definitely worth every penny. Aside from TV and comedy, Tula is also an artist who began by doing several song Remixes in Kalenjin and Swahili versions. Some of Tula Chemoget’s remixes that really did well include;

Tula Chemoget is currently an inspiration to so many young kids with talent, with his comedy that is mostly inspired by his life experiences around the community. He never fails to keep up with audiences expectations with his rip cracking comical acts.

A number of audiences have, however, been confused about the identity of Tula Chemoget who has a resoundingly similar voice to DJ Kaptula of Kass TV. We have determined from reliable sources that Dj Kaptula and Tula Chemoget are one and the same person.

In the video from which the now viral memes have been generated, Marindich – with a dusty face – was seen impersonating a rally driver, explaining how extreme and tense the rally was. He was accompanied by his ‘navigator’ whom he identified as Kaptula but refers to as just ‘Tula’.

Speaking in their Kalenjin dialect, the duo explained how the terrain was challenging and ended up in a bush while trying to navigate the map, which they say was complex to understand.

“The race was fun but unfortunately we found ourselves in the bush, look at these branches which stuck inside our car, we even almost rolled over. All we could see was white drivers passing us by in the bush,” said Marindich in part of the video clip.

Screenshots from the video have now been used globally to generate Memes.

Tula Chemoget is a popular Kenyan comedian who is known for his comic acts with Inspector Chepkwon his associate. Unknown to many, Tula also goes by the stage name DJ Kaptula a popular radio and TV presenter at Kass Media.

Chemoget in Kalenjin language means a boss and is a popular informal way of referring to a friend or senior when greeting them among the Kalenjin community.

Arap Marindich is a rising Kenyan comedian from Bomet, Rift Valley. The Kalenjin comedian shot to international fame after his ‘Safari Rally’ mock video tickled the world and made him an international meme.

One thought on “Tula Chemoget.”