The impacts of macroeconomic factors on money supply 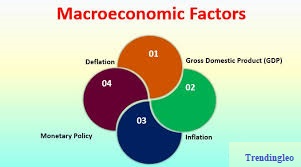 Effect of GDP on Money Supply

The Effect of Inflation on Monetary Transmission