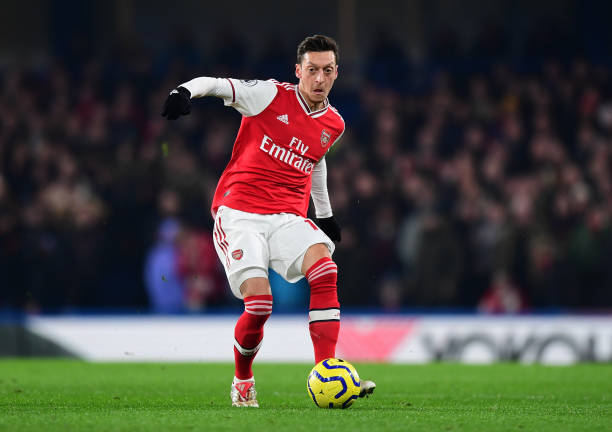 Mesut Ozil has been missing in action since the premier league restarted with head coach claiming that Mesut was suffering from a back injury.

Ozil may very well not fit into the current arsenal playing structure with Arteta opting for players with higher work rates rather than creativity. Ozil has an impressive record of 54 assists and 33 goals in 184 appearances. The 350 pounds a week player has a contract with Arsenal until 2021, and is currently the highest paid Arsenal player.

Ozil 31 is currently at his prime years and it is a time in his career when Arsenal should be getting perhaps his best quality. He is a player that has proved himself several times as worthy of a top five spot among Arsenals best play makers.

What is worrying about Ozil’s situation is the fact that the club is undecided whether to keep him or let him him go. Ozil would definitely have fun running down his contract even if he does not play, a situation that would hold funds for arsenal which could have been used to fund and maintain a regular player.

If Arsenal is interested in selling him at the end of the season, it would have been ideal to give him as much game time as possible in order to attract buyers, but with a player who clubs can no longer ascertain his quality and the huge wage demands, it will be an uphill task convincing them to purchase Mesut.

Perhaps the only way to have Mesut leave Arsenal is if he received a better offer elsewhere in terms of wages and play time. That will not happen as long as Mesut does not even make it to the substitutes list, with three games remaining, an FA match on saturday, away at Aston Villa and at home hosting Watford in their last match of the season.

Every Arsenal fan agrees that the cub needs reinforcements in the summer if it wishes to have genuine opportunities to challenge for a champions league position next season. Ozil is one of those players who would fetch a fairly good price in the market, if clubs were convinced, he still got it in the game.

With the current situation, it looks like Arsenal will continue paying Ozil for another season without appearances, perhaps unless he is made available for a free transfer.