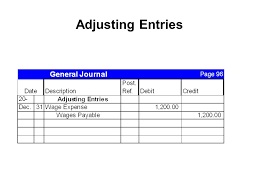 Within the accounting process, many economic activities exist which might not instantly call for the recording of the transaction. These transactions are catered for through adjusting entries which act to stand for the revenues and expenses within the accounting period that they resulted. There are two instances of adjusting entries first deferrals in this case it keeps expenses and revenues which might have been recorded but then need to be deferred to some other period.

The other instance is accruals which apply to expenses and revenues which have been accrued but not recorded yet. For instance the revenue interest which has been earned within one period despite the real cash payments have not been received till early in the period that follows. Entry adjustments are effected to take note of the revenues within the period that were earned.