BLM Sparks an increase in cases of Racial abuses in USA. 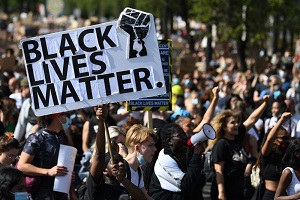 A lot has been said and experienced over the past four months since the murder of George Floyd by Derrick Chauvin. Black lives matter movements have become more prominent before but amidst all these calls for end of racism, a number of issues have come up that require genuine discussions in a bid to offer sort of a lasting solution to effects of racism.

Politics too has played a major role especially with America set to go into elections later this year, Democrats and Republicans have been on each other’s necks on who best represents the interests of Black Americans. For the first time, a few Americans with ancestral ties to Africa have come out to outrightly support Donald Trump under allegations that Democrats have for years taken advantage of their votes.

Nevertheless, I feel there is a huge misconception about the term “African Americans” or rather the use of “White & Black” in reference to races. First, Africa is a continent and not a country as many Americans tend to believe, the people of America are Americans regardless of their migration history, it makes no sense to refer to an American Citizen as African American when the person has never lived or travelled to Africa.

Picture this, South Africa was Colonized by the British, after independence, Mandela formed a government that acknowledged all those born and residing in South Africa as South Africans. What sense would it make to refer to a South African as a British South African, people who have never lived in the UK?

Recently from one of the interviews, someone alleged that Americans with ancestral ties to Africa ought to be grateful for the opportunities America has given them. The interviewee was a teen probably 18, who seems to have no clue of American History and the contributions of slaves to the building of America. It would be insane to even imagine of others as second-class citizens when all they have done is live their lives while making a name for the United States.

Black Lives Matter movement has also focused more on ending Police injustices against a specific community but not much towards ending racism. The efforts may have sparked an increase in the number of people feeling confident enough to report instances of Racial abuses, on Twitter, Instagram and Facebook, but this has not necessarily led to increase in prosecution of perpetrators.