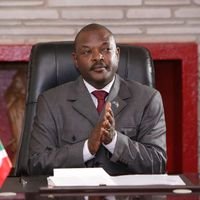 The government of Burundi has announced the death of ex-President Pierre Nkurunziza, through a Twitter post on Tuesday afternoon, they attributed his death to Cardiac arrest. This happened just a week after the immediate former First Lady had to be airlifted to Nairobi Kenya for medical attention after allegedly contracting Covid 19.

Worried opposition leaders had to flee the country with media stations being shut down a bid meant at scaring critics or ensuring the world didn’t see or hear the happenings around Burundi.

He won a heavily contested election marred with Controversy, this was later followed by Nationwide protests regarding his eligibility to run for another term. The protests led to massive loss of lives as the police clashed with innocent civilians.

Nkurunziza announced that he would not be seeking a fourth term on 7th June 2018 with his term ending in 2020. In March of 2018, the ruling party CNDD-FDD named Nkurunziza the “eternal supreme guide”, just a few months to a constitutional referendum in May of 2018. The biggest proposals in the constitution were allowing Nkurunziza to remain in office until 2034, a move that received opposition locally and internationally. Nonetheless, the constitution was passed giving Nkurunziza an opportunity to rule beyond 2020.

Most people were keen on seeing his role in Burundian politics as well as shaping development in the African continent. Nkurunziza just like many African leaders were faced with challenges leaving power and potentially having trouble adjusting to life without power, as the country struggles to deal with COVID 19 pandemic, it can only be hoped that his death will not destabilize the country.