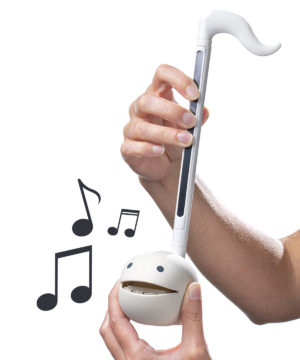 The Otamatone is a singing toy with a quaver shaped body, the sound is produced from the notehead. You require two hands and a couple of fingers to play: one hand is used to hold and squeeze the notehead while the other is used to control the tuning pitch, this is achieved through placing one finger on the ribbon controller and has been intentionally delinearized to look like a normal guitar, nevertheless, there is a short distance between higher and lover notes.

Varied pressure on the head establishes some effect while shaking the head yields some vibrato effect. the Switches on the back of the head permits users to vary octave, turn it on or off or increase/reduce volume. There are multiple versions, while the original version was in yellow, white, black, pink as well as two other skeleton colors. The mini is a small variant that does not have a note selection slide hence plays only configured tunes though available in a number of colors.

The Neo is an improved version optimized for enhanced playability with some wide fingerboard as opposed to original, it is also compatible with Otamatone Studio application that promotes various sounds to be played. This version is only available in white and black.
The Deluxe is 44 centimeters wide and looks slightly larger by the long neck, a power entry, a line-out jack as well as a three-level pitch with a volume adjuster. Just like Neo, it’s available in white and black.

We also have Otamatone Techno which is an enhanced version of Otamatone Deluxe and can be connected to a smartphone application for additional features. The Otamatone Wahha GoGo resembles the original with a slightly altered design, the teeth are an imitation of the Wahha Gogo laughing machine. It is available in Black, Gold, and silver.
The Otamatone Jumbo is a bigger version that is often like a guitar and comprises of a clap that helps in squeezing the mouth. We also have Otamatone Digital that has a piano-style keyboard, it enables chords to be played with multiple notes simultaneously.

Get it from Amazon using the following links