Oscar Sudi speaks to the hearts of Kenyans. 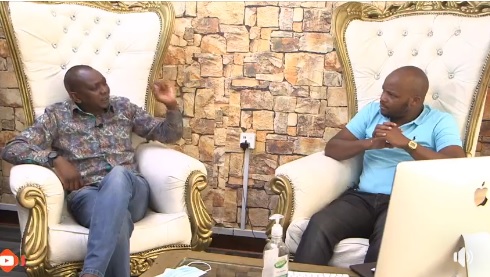 While speaking on a live interview with Jalango on Thursday afternoon, Oscar Sudi gave a preview of his life, that he was born in Kitale then later moved to Kesses near Moi University.

He admitted that he was once a tout encouraging passengers to board vehicles at Eldoret town before he was employed as a tout in one of the Matatus plying Moi University to Eldoret town with a salary of 800 shillings a Month.

Born in a family of five with barely no land, family challenges forced him to stop schooling at an early lunch in order to help his family make ends meet.

On Politics, he admitted that he is only in Jubilee on records but his heart is long gone from the once majority party. His basis for open criticisms to the party that sponsored him to parliament is the failure to meet or achieve promises given to the electorate during 2017 campaigns.

Sudi also admitted that Raila Odinga is a close friend with a relationship that began with his closeness with Railas late son Fidel Odinga, he also admitted to having met Raila several times and he is unapologetic about it.

On BBI, Oscar admitted that him being skeptical about BBI is the lack of open hardheartedness and inclusiveness in the process.

When Raila and Uhuru went and met at Harambee house, i thought he would come after a week Raila would meet Kalonzo Musyoka, Musalia Mudavadi and Moses Wetangula for unity talks and on the other hand Uhuru meeting William Ruto, Aden Duale and others.

If they had pursued this approach there would be no need for rallies or misuses of public resources. Aside from politics, Oscar Sudi spoke at length on issues affecting Kenyans.

View the entire video on the following link