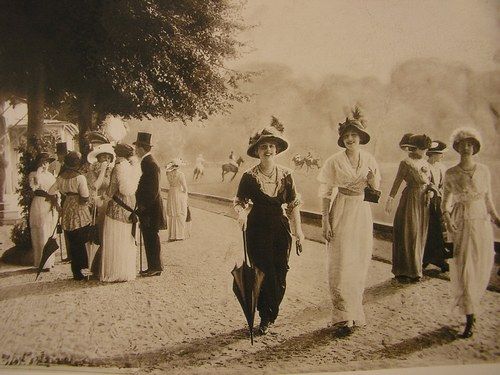 There is certainly much more to the modern day Paris than wine and fashion. The Belle Époque is one historical event that shaped Paris, leading to the establishment of one of the most superb metropolitan cities famous for its knowledge, creativity and innovation. It was simply an outburst of cultural innovation, optimism and artistic endeavors. The period lasted between 1870 and 1890 marking a great period for theatre and art, as they marked the epitome of success with the collaboration of Alphonse Mucha and Sarah Bernhardt.

The Belle Époque in so many ways laid foundation to the economic growth of Paris as well as its identity. According to Jones, the period gave rise to a public revolution with regard to production of better colored as well as stylish posters which were then use for civic education as well as marketing.

The posters simply led to heightened business success in success as it helped draw customers to department stores, sports events, food and drink joints as well as entertainment events. To a larger extent this also contributed to the growth and publicity of other media marking a major influence of the Parisian Theater. Without the media, it would have been quite hard to draw audiences to theaters or even spar increased revenues in other sectors of the Parisian economy.

It is clear that the economy of France increased significantly during this period especially with regard to the persistent impacts of industrial revolution and development. The growth of art led to several jobs, giving the people more purchasing power, which helped Paris even grow further. There was also an aspect of technological growth across Paris by the use of the telephone, as well as expansion of the railways. This period simply led to growth of infrastructure which then facilitated other sectors of the Parisian economy.

On the other hand, the Belle Époque also sparked growth in agriculture as it was improved by artificial fertilizers and new mechanization. This era reinforced a cultural revolution in the wake of mass consumers among the French citizenry, as a result of the power to produce goods and employ more people. Life changed rapidly especially among the middle and upper class.

Furthermore, the quantity and quality improved with the consumption of previous favorite foods increased especially spirits, beer, coffee and sugar. In the same way mobility was also facilitated by the invention of the bicycle. Fashion also grew as an item for persons within the middle class enjoying former luxuries such as gas, running water as well as electricity. The improvements in infrastructure implied that persons could now go to other parts for sporting activities and holidays. The Moulin Rouge commonly referred as the home of Can-Can transformed mass entertainment with fresh performance styles in theaters around Paris that was characterized by realism of modern writers and shorter forms of music.

The Belle Époque also increased life expectancy for children as well as gave them hope to pursue meaningful education. With such growth Paris was crowded with a population comprised of mostly the working class. Such a new experience with most people having money to spend established fresh capitalist desires, leading to the idea of weekends. With such developments enabled people to spend some free time at the end of each week. With public transportation available and money to spend they could easily visit various parts of the City. Weekends and nights majorly became times of leisure enjoying themselves in theaters, cafes or in weekend trips.

From the arguments above, it is clear that the Belle Époque was a major part of the formation of Paris, given the major developments in art, infrastructure and communication, it set a foundation for the formation and growth of what Paris is today. To grow as a city Paris needed to attract a population mainly comprising of the working class or with spending power as well as be able to satisfy their demands.