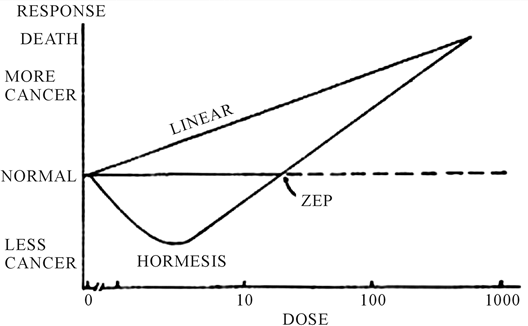 On the other hand, the Linear No-Threshold model argues that radiation is always deemed harmful, and there can be no safety threshold, given that the damage biologically caused by ionizing radiation is proportional directly to the quantity of human body radiation exposure. In this paper, I provide information against Linear no-threshold and give reasons why hormesis and thresholds remain desirable supporting the petition. It is regrettable for physicians to accept cancer risks from low radiation dosage on the basis of the federal regulatory assertions and requires more deliberations. This is a threat to patients and inhibits good medical practice.

It is also imperative that as per the model, radiation yields cumulative harm across the entire human body, irrespective of how low the dose rates are. Both assertions are discernibly false, as there is an improved protective biological response, indicating that any dose rates significant to permit that response to occur allows remediation of any damage which may have occurred on intact organisms through repair or the removal of damaged cells by the immune system or apoptosis. Therefore, it is evident that Linear no-threshold has led to policies and regulations that are simply unnecessary for protection, but eventually lead to great harm in the practice.

Furthermore, several studies have been published over the past two decades on hormesis and reveal that it is generalized, reproducible, and void of biological agent, model, and mechanism. In several, point to point comparisons, the hormetic radiation model has seemingly outperformed linear no-threshold for accuracy with regard to low dose predictions. It is imperative that the several studies on hormesis not only indicate the strengths of the model but also showcase serious inadequacies within the Linear No-Threshold model suggesting that it can no longer be used as a basis since it has over time been proved that it does not provide accurate estimates on various experimental systems and various endpoints, plus those influencing the cancer process, it is, therefore, not ideal to base on it as a dose-response risk model.

Despite the common norm in research that one valid study can be used to discredit a great theory, Linear no-threshold theory has been exposed as invalid within not just one but several reproductive and peer-reviewed studies, impacting a huge domain of biological endpoints and models, factoring in the vital stage of the carcinogenesis process like tumor formation. With such detailed research information, indicating the shortcomings of the Linear no-threshold it is not scientifically ideal to apply Linear no-threshold has the default risk assessment model as well as a basis for decisions on regulations. The Linear No-Threshold model has over time remained a challenge to validate, with several approaches that invalidate it.

Beyond the estimation of dose-response functions specifically on federal regulations, scientists focusing on health safety have found that hormesis has the prospect of beings used for prevention and treatment of several diseases; a detailed comprehension of hormesis can also be crucial for the prevention of diseases that are degenerative and creation of safe and effective regimens for cancer treatment. Regimens, in this case, refer to the adaptive response of preconditioning which focuses on low or high stressor induces could help the body in healing faster.

The data supporting the Linear No-Threshold model are also equivocal and refuted by experimental and epidemiologic studies. The utility, validity, and applicability of this model is subject to debate. As highlighted earlier several studies indicating that the radiation carcinogenesis risks at doses of 100 mSv and below is exaggerated by the Linear No-Threshold model with more evidence implying that such doses instead exert some hermetic effect. The radiation hormesis phenomenon suggests that humans exposed to low radiation have a smaller consequent risk of getting cancer as opposed to humans who are not exposed, apparently, due to the radiogenic up-regulation result of adaptive responses of cellular repair mechanisms.

Radiation background epidemiologic research as well as recent nuclear incidents such as Fukushima and Chernobyl imply that the Linear No-Threshold model may not be that ideal. Arguing from a biologic viewpoint, foci of DNA damage low radiation doses frequency is a bit higher as opposed to that of spontaneous mutation, indicating that molecular repair approaches are successful at fixing DNA damage as well as alleviating the effect of such damage with low doses of radiation. Furthermore, recent data indicate that cancer risks increase after successive CT scans. Nuclear accident data also indicate that low radiation doses do not in any way increase the risk to cancer among residents who have been exposed.

Goldman argued the absurdity of the Linear No-Threshold model in 1996 when he calculated the increase in cancer risks as a result of an increase in cosmic radiation if the entire global population to add some lift to their shoe wear (Goldman, 1996). Elements of Linear no-threshold are untenable in which the entire foundation of Linear no-threshold is weakened regardless of the few correct elements under a constrained exposure of ionizing radiation range. Nonetheless, this is immaterial with regard to Linear No-Threshold’s extrapolative character with regard to diminishing radiation exposure levels in which the general public may be exposed. Based on the arguments raised in this paper, it is evident that Linear no-threshold cannot be sustained empirically. Extensively uncovering empirical evidence on what Linear no-threshold advocates for seems a futile cause. It would be surprising to note that within the sciences in such an advanced century with regard to research and technology, a valid argument is erroneously and implicitly taken as correct.

Liner No-Threshold is obviously flawed and focuses only on molecular damage as opposed to organismal protective molecular or organismal and tissue level biological reactions that remove or repair the damage. Within low radiation doses tend to be more responsive as opposed to compensating for damages, removing or repairing some of the large damages triggered by endogenous processes. With less reasonable evidence in support for Linear no-threshold assumption, as well as several pieces of evidence supporting the radiation hormesis model, Linear no-threshold proponents are inadvertently responsible for promoting radiophobia given the plethora of negative consequences associated with it. Furthermore, and in comparison to what Linear no-threshold proponents argue, Linear no-threshold is not cautious or conservative, therefore, no public regulation found on these obviously false foundations can be said as protective.

Radiophobia sources cannot be ignored any further: there is no documented evidence on the harm of radiation exposure, whereas there is on Linear No-Threshold. The entire public deserves protection from radiophobia as opposed to protection from radiation. It is an illusion to believe that basing on Linear no-threshold will give confidence to the public that radiologists are indeed safeguarding them from harmful substances, when it is Linear no-threshold that gives them the worry of something to fear. It is therefore reasonable and the right course to end adherence to Linear no-threshold and shift to the hormesis model.

One thought on “Linear No Threshold Model”