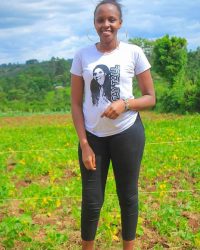 Chepkemoi Soy Memo Faith who goes by the artist name Fay Tall “Vay Doll” is a First rising Kalenjin artist who initially began doing song covers in Kalenjin, but then diversified to collaborations with other artists as well as sang original songs. She is also a gifted events MC.

Many of her fans love her not only for her music but for her comedy acts and philanthropic activities.

Fay Tall was born on 3rd August 1995 in Kericho Rift Valley, she is an Alumni of Nyakach Girls High School and Kenya Medical Training Institute.

Fay Tall is described as having a heart of Gold with positive influences around those she interacts with. Her charitable acts came into the limelight in 2019, when she partnered with Miss Kalenjin Kenya to donate sanitary pads to women prisoners, below are some of her Charitable works.

Ending the year with love and charity, I, miss Kalenjin Kenya, and our service to humanity group shall be visiting Kericho prison on 31st this coming Tuesday to donate sanitary towels to the women prisoners. We welcoming anyone interested to join us, we shall all be meeting at Imaniz restaurant by 10am.

She led an initiative to donate food products to low income families affected by the Corona-virus (Covid-19) crisis in Kericho.

Her First release from youtube was a song titled “Parnaotet” that simply gave thanks to God as a testimony for her life.

Watch more of her songs at her Youtube channel https://youtu.be/etNrdZVQ-uQ