Cyberbullying and its effects 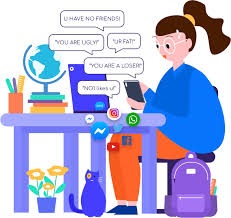 The Internet is one of the major technological inventions of the century; it propels communication, business, and international connections that promote multicultural interactions. Complaints about the internet include privacy concerns, pretenders, and criminals who take advantage of users. Con artists use the platform to pretend and earn money from unsuspecting victims. Though the Internet is beneficial to users, it predisposes them to personal and professional attacks; for example, bullies use these platforms to conduct individual and collective attacks on people. Anonymity and the thought that they can get away with the act can motivate people to become online bullies; however, parents have a responsibility to monitor their young ones to protect them from these crimes.

We have cases of bullying in America where victims have developed a thick skin and somehow present themselves as immune to cyberbullying. Personally, I believe that there is more background to bullying than what many tell us about it. Beginning with the social setting of upbringing to marginalization’s within the society, perpetrators of cyberbullying either use it to communicate their dissatisfactions with certain individuals within the society or as a reaction to the things they perceive as wrongs in the society. For instance, it is common to see rich kids bully those from poor families who probably have good looks or perform better in class than them. This is reactionary to the delusion that it should have been them having it all and not the balancing of gifts.