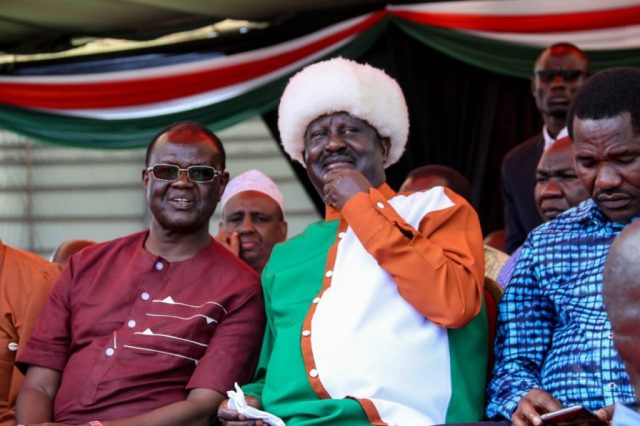 This was to be extended to Saturday when from early morning groups of youths bribed to attend the Rally and to Cheer Raila began complaining that 500 shillings was too little.

In some cases, politicians could be openly seen distributing money to people to attend the Rally. Raila the statesman kept his cool all through while his lieutenants deprived Senator Murkomen and Moses Kuria seats at the rally.

When Murkomen took to the stage, the crowd went wild in cheering them something that clearly did not please the organizers.

Matters got worse when Moses Kuria and Murkomen left after the latter’s speech as the crowd left the stadium with them leaving Raila to address barely less than 200 BBI proponents.

Kalonzo Musyoka former Vice President even cracked a joke of the situation saying that the rally would continue even after the citizens had left.

Later Raila seemed displeased with those who deviated from BBI to politics including David Murathe and Francis Atwoli. The two have so far managed to create dishonest intentions on BBI with constant attacks against the Deputy President William Ruto who remains the front runner in 2022 presidential elections. Raila himself has occasionally tried to restrict himself to Unity Calls but his lieutenants always see it as a campaign opportunity to try shift political grounds.

As the rally goes to Nakuru next Saturday perhaps the organizers will take a different strategy.