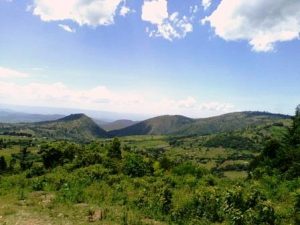 Nandi County is situated In the North Rift of Kenya, occupying approximately 2,884 square kilometers bordering Kisumu, Kakamega, Vihiga, and Uasin Gishu counties. County Headquarters is in Kapsabet town with other towns that include Lessos, Nandi Hills, Mosoriot, Kobujoi, Kabiyet, Kaiboi among others.

Chepkiit means “View from above” is located along the Eldoret Kapsabet highway and is home to about 40 bird species. Word has it that it was a designate sport for mercy killing by members from the Nandi Community. Back in the days, the elderly were killed or killed themselves by throwing themselves off the cliff to end their pain.

Chepkiit is a natural waterfall that makes a perfect spot for picnics, Video shooting, team building, nature walks, and camping within and around the North Rift region.

Probably and underrated but famous rock in Nandi. It is of great cultural significance to the Nandi and the Terik community as well as serving as a boundary between the Teriks and Luo communities.  It provides a pleasant view of Lake Victoria and Kisumu city. It is a site hard to describe with words but a worthy experience to anyone who loves site seeing.

Koitalel was an influential Nandi leader during the colonial period who guided the Kalenjin people towards the longest British resistance in Kenya. The museum was inaugurated in his honor and is located in Nandi Hills sub-county just a few kilometres from Kapsabet town. It houses artifacts of war and other antiques signifying the Kalenjin community culture.