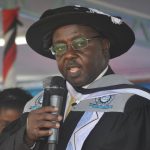 One thought on “Masinde Muliro University Thrown into Mourning again after another former Vice Chancellor Passes on.”