Exploration of oil and gas impacts to the environment. 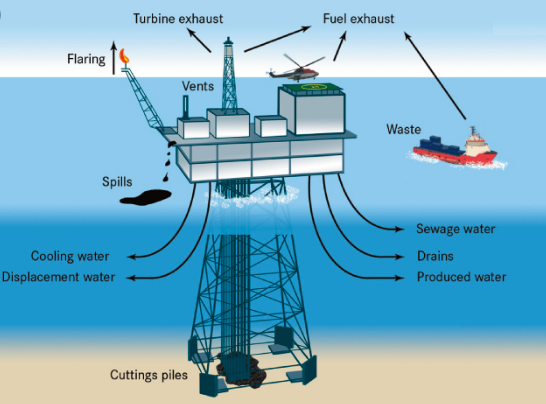 The issue is that during seismic exploration, agricultural activities like silage preparation could easily shred the wired flags used for survey stakes mapping out of the exploration areas. This metal bits could affect animal life if consumed from the silage. Furthermore, if animals consume flags or ribbons from stakes and markers they could also die. In addition, seismic lines significantly destroy vegetation leading to environmental pollution such as sediment particles entering water surfaces.

In situations where dynamites are used for exploration, holes created may affect the water table causing water to seep or flow to the surface. Such water surface disturbance could destroy arable land by making them swampy hence hard to cultivate. There is also extra pollution created by items used during exploration such as radio-active elements, plastic bags and metallic components.

There are far-reaching impacts on the environment nearing drilling sites. For instance, the issue of using heavy drilling machinery as well as roads from the drilling sites used for transport. There is an effect of poor soil productivity from the erosion caused due to effects on soil compaction making once fertile lands unproductive. Noise pollution is also another major impact caused by drilling which may occur twenty four hours a day affecting the lives of people living nearby. Common amenities such as water and electricity shall also be affected as exploratory drilling tends to consume huge power and large volumes of water causing shortages.

An issue where drilled wells do not yield significant results, and left unclosed could create dams that could lead to people drowning or even serve as mosquito breeding sites. Air pollution is also a major impact as most drilling equipment use turbines and engines powered by diesel or petrol. This equipment may produce nitrogen oxides, carbon IV oxide or volatile organic components which pollute the air. Some drilling activities yield radio-active material that could significantly cause ailments such as cancer. Before a comprehensive study is done on possible effects and such impacts determined, part of the population may have already been affected or died.

There could also be impacts on the society and parenting as well as most mature people tend to seek employment at exploration sites leaving children home alone unsupervised. This could largely increase crime rates or indulgence in unworthy behaviors such as alcohol and drug abuse. The value of property and basic commodities as well tend to rise as a result of high demands caused by population increase. This affects the locals who may not have adequate employment or reliable sources of income. In some cases local populations are forced to relocate due to the live disturbances near the exploration sites or dangerous gases emitted.

Apart from the negative issues from oil and gas exploration, there are a few positive issues such as monetary benefits from the lease and compensation payments. There also payments as a result of seismic tests and primary evaluations. Some unyielding drilled wells could also be converted into water basins to aid in irrigation and livestock raring. Furthermore, roads leading to drilling sites are often upgraded to allow easy movement to and from the sites, this could assist the local population in movement as well as communication.