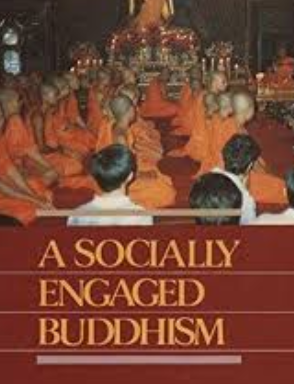 Engaged Buddhism often referred to as socially engaged Buddhism is a movement under the Buddhist religion. This was founded by Zen monk Thich Hanh a Vietnamese around the 20th century. The basis of Engaged Buddhism is applying the teachings from Buddhism in a more social or activist manner. Engaged Buddhism thus looks at the social structures and uses a perception that suffering might have it genesis from them. It finds specific economic, political and social institutions as indices of hatred, greed and delusion. Buddhist are thus forced to work hard to be socially liberated by engaging with such external grounds of suffering.

As per Engaged Buddhist, suffering is not only perceived as psychological, to be overwhelmed by such approaches as mediation, but finds its roots in several different factors. Social and political struggles among others, can be adopted as a tool to overcome suffering. According to Kraft, since Buddhism is perceived as passive, escapist or rather otherworldly, engaged Buddhism might at first be seen as a self-contradiction.  The approach taken by engaged Buddhists is that no clarification can be enough as long as others remain constrained in delusion or true wisdom is demonstrated through compassionate actions.

Engaged Buddhism therefore tries to associate itself with religious organizations to predict possible disasters that face humanity: environmental pollution, holocaust or over-reliance on non-renewable energy sources. It attempts to support those who are fighting against poverty, hunger and oppression globally.

Furthermore, engaged Buddhism is motivated ideologically, and obsessed with showcasing what they view as Buddhism new down. As classical Buddhist have offered their evidence previously, engaged Buddhism is geared towards changing the criteria so as to keep on construing it as new. Classical and engaged Buddhism share the fact that socially active Buddhists strive to promote Buddhist teachings as a foundation of society. There are also aspects of ecologically and socially responsible economic system in both. It also important to note that both foster the creation of an environment to facilitate success and reduce suffering for personal transformation.

It is important to change procedures, policies and character as well as the human mind way of thinking behind the draconian social practices and policies. As advocates of system change, engaged Buddhism help to address the ecological crisis through advocating for system change. Arguing that injustice is not just a wrong perpetrated against an entity it helps in looking at situations holistically so as to provide genuine solutions.

Another vital contribution to ecological crisis by Engaged Buddhism is advocating for a positive effect engagement for a good measure to lead to the kind of person that appreciates others. Working together to fix social problems according to engaged Buddhism can help the society to become more compassionate, tolerant and wise which works to solve the ecological crisis in the long term. Individuals are easily moved through collective actions, giving the society a broader perspective and good relationships with people of different cultures.

For Buddhist mediation is a crucial aspect of their personal transformation. The kindness and love in mediation helps the society become tolerant and be able to sustain lasting commitments to different social engagement forms. Being able to have a society that is minimally fueled by aggression and rage challenges that lead to ecological crisis are solved. The ability of a society to engage effectively in social issues is promoted when people keep their eyes on the bigger picture as opposed to having clouded visions by ego and anger.

Engaged Buddhism thus takes a religious perspective in trying to provide solutions to the ecological crisis, by agitating for social and political freedoms, it contributes to the creation of a society where justice prevails and people of different backgrounds can be able to co-exist together in harmony.

One thought on “Socially Engaged Buddhism”