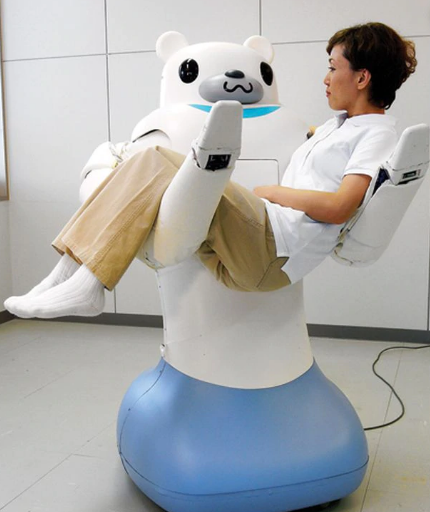 Following stiff competition in the manufacture of machines from the other high performing Asia economies like South Korea, Taiwan and Singapore, Japan shifted focus to high precision items like robotics and optics. The robotics industry is indispensable in Japan than any other country in the globe. This industry provides employment opportunities to more than a quarter million industrial robot employees. It is anticipated that in the subsequent 15 years, the number will grow exponentially to over a million workers, and the revenue is also expected to close to $70 billion by 2025.

Previously, we have heard of robots used in places like industries, the space, manning security, rescue missions and even at home. Now, Japan as taken the notch higher and introduce robots to a place where human life is considered vital: the hospital. The iRobot company has invented a Remote Presence Virtual+Independent Telemedicine Assistant (RP-VITA), a form of tablet-remote that allows doctors to take care of patients tenuously even when they are in far-flung places from their patients.

The device has received commendable reception so far; it is widely used in consultations and has even been commercially set up in 7 hospitals in the USA. In addition, there is another robot called Remote Presence 7 (RP-7), which enables doctors to carry out examinations on their patients from miles away. This telerobotics application can proof valuable in a crisis situation when each second counts.

Finally, the sun is bursting through for the amputees who had lost hope of ever walking straight again. Robots have restored the hope, which involves less muscular movement, thus no pain, but at a spiked cost. The BIOM prosthetic ankle robot unlike other prosthetics which are powered by an individual’s dragging, BIOM powers itself. There is reduces cases of fatigue and pain between joints and in the muscles.

Today, robots are used in urology departments in Japanese hospitals to examine the contents of urine and give pertinent diagnosis and prescription of drugs. This kind of robot was invented by the Tomoko Takiji companies, famously known as “Toto”. The Toto Flowsky uroflowmeter measures the amount of urine passed when the patient simply uses the toilet as normal. A sensor which measures the quantity of urine in milliliters is placed inside the toilet tank and just behind the tank is a device analysis which scrutinizes the contents of the urine.  It is already in use at memorial Hospital Mitsuo where results are displayed on the screen in less than 20 minutes.

Too much baggage for patients is a liability, and the robots have swiftly chipped into their aid. Carrier robots took over from the 20th century Helpmate machines. They carry stuff around the hospital and act as guides to the patients looking for specific rooms. The Aizu Central hospital in Japan has actually recruited two robots, one that acts as a receptionist and guides patients around the hospital and the other which acts as a carrier. The other types of hospital robots are those that help in taking care of the elderly, and humanoids that generally keep patients company in the hospitals.

The AIST Japanese research company invested a magnificent therapeutic robot called Paro. It is very simple in outlook, with a harp seal which makes it very beautiful. Paro is aimed at bringing on a cathartic effect and drawing out emotional responses from patients in hospitals, nursing homes or mental facilities. They bring in the therapy provided by pets; they help the patient relax in a very peculiar and outstanding way that humans cannot match. They do not talk; the simply sit and listen, wagging its tail once in a while.

Paro has demonstrative sensors which enable it to respond to petting by wagging its tail or winking eyes. It has the ability to learn the name and can illustrate emotions of surprise, hunger and delight. Like humans, it produces sounds and goes off to sleep at night. All these capacities have facilitated its relationship with humans to a level close to that between a man and a pet.

In their unbounded quest to robotize their hospitals, the Matsushita Company has fashioned a robotic hospital aid called HOSPI which helps to convey blood samples from patients to lab facilities. This fall, the Toyota Company unleashed its updated version of the Walk Training and Balance Training Assist robots. These robots are used in physical rehabilitation centers and were tested in 20 medical facilities in Japan. They amalgamate gamification and an audio-visual response to buttress the rehabilitation process. They are designed to tackle the rehab needs of patients who have trouble walking or maintaining balance due to an injury or illness.

In a nutshell, the ancient fictional stories of robots coming to the aid of people have turned factual. They have taken over various sectors of human life and play an invaluable role. In Japan and USA, robots have been introduced to the medical sectors, and widely used to care for the aged, so as to cut on medical budget spent on human medics serving in this area.

One thought on “Robots in Japanese Hospitals”