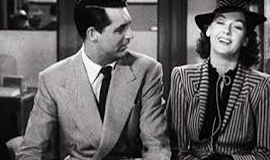 The film starts in the Chicago Morning Post newsroom where Hildy Johnson believes that she wants a way out of the reporting clamor, she needs a normal life. Nevertheless her Ex-husband who is also the big city newspaper editor seems to have other plans.  Warmly charming and beautifully brilliant, the film comes out as a classics with a comic outlook to the public manipulation shady game. Hildy intends to her journalism job so she could get married to an insurance man then relocate to Albany somewhere in New York, He Ex-husband Burns is determined to sabotage such plans. He therefore lays some exclusive story on her desk involving some impending execution as well as politics, Burns believes that Russell will not be able to resist such a story. The chaos that follow are genuinely hysterical, though it takes time to internalize all the film scenes. With awesome verbal athleticism, the film is indeed one of the biggest comedies of all time.

The setting of the film is somewhere in New York around the 1930s, there seems to be no specific narrator as the perception is omniscient, despite the audience spending so much time focusing on Hildy Johnson. The tone and mood is witty, fast-paced, comedic, sophisticated, suspenseful and farcical. The main protagonist in the film is Hildy Johnson while the antagonist is the Ex-husband Water Burns, the mayor could also be seen as an Antagonist. There are two evident conflicts in the film one being that of Hildy Johnson versus his Ex-husband Walter Burns as Burns tries to frustrate her efforts to quit journalism and get married to an insurance guy, and the other conflict being that of the mayor trying to have someone who is deemed innocent executed to benefit his prospects in the upcoming elections, in this case Walter Burns and Hildy are forced to work jointly to obtain the big story for the Chicago Morning Post. The climax of the film is when Earl indicates that he is hiding in the desk and apprehended.

Career and romance collide when Hildy tries to quit her job and Burns who is also her ex-husband owing to the bliss quiet life. Burns manages to convince her using an assignment that may turn out as her greatest story involving a controversial execution set for the morning that follows. This is an attempt by Burns to engage the mind of Hildy while he takes the time to find a way out of stopping her marriage to Bruce who maybe dull but a bit respectable. On the other hand, Hildy is aiding an escaped prisoner in an attempt to uncover a great political scandal.

Hildy Johnson perfectly fits in the film as she obviously turned out a great performance that won her accolades as one of the funniest women. Burns also turned out well though his intentions not going on very well with most audiences, his working relationship with Hildy seems great. The mayor though to many audiences, he brought out the character very well had a role that most audiences seem to hate as it reflects common issues with many political leaders.

I like the features used in cinematography within the film particularly the lighting and dress code of the various actors.  The setting is also great and seems to mirror elements of New York in the 1930s. The producer uses several techniques playing with frame rates, shutter angles and digital effects to make film images feel as if they are a consequence of the protagonist’s vision. Every image bears with great comic state of each character, every glimpse or memory embedded with a powerful glimpse of humor and injustice. The film indeed has used cinematography to express subjectivity with elusive touches changing an attractive visual conceit into an extraordinary piece or art.

The director made notable advances in the filmmaking world. He used a fast sharp dialogue with characters overlapping each other to give reality and authenticity to conversations. The director also employed a sound mixer to turn on and off the various microphones as need be during a scene. This was indeed a great advancement in film sound recording. The roles as used by the director also paved way for major female leads in the film industry.

The producer of the film carried out a great lick realizing speed through overlapping dialogue as well as maneuvering the various actors within a spectrum as opposed to a quick cutting. By switching the main character’s gender, and including some additional romantic tweaks, the producer turned the masterful, wild Chicago newsroom into an awesome screwball comedy. Of course, there is no way such a storyline could be true. I am a bit skeptical about referring to the film as the best comedy film as there might be others. It is obviously a great film and perhaps it proved how overlapping dialogue could be a great tool for film producers. I am not much of a fan to screwball comedies therefore I may fail to give enough credit, for this I do believe that this is just a rapid fire comedy.

This was indeed a seminal film though not really groundbreaking, it does not have the edge expected of many comedy films today, but I admire it for being potent. The writing is also good, it is a witty and funny film though modern comedy audiences may not get the hype of the film as they not be used to blue humor. The plot of the film is also enjoyable especially given the sharper performances. I loved the performances of Hildy and Burns as they seem to have issues with each other. Apart from the dialogue, the film also put in some good work with respect to editing, some pretty influential, snazzy stuff. Overall, the film is well shot and packaged and for sure it is classic though overrated. I might have loved the film if I was more of a fun to such kind of comedy or perhaps if I had watched it earlier.